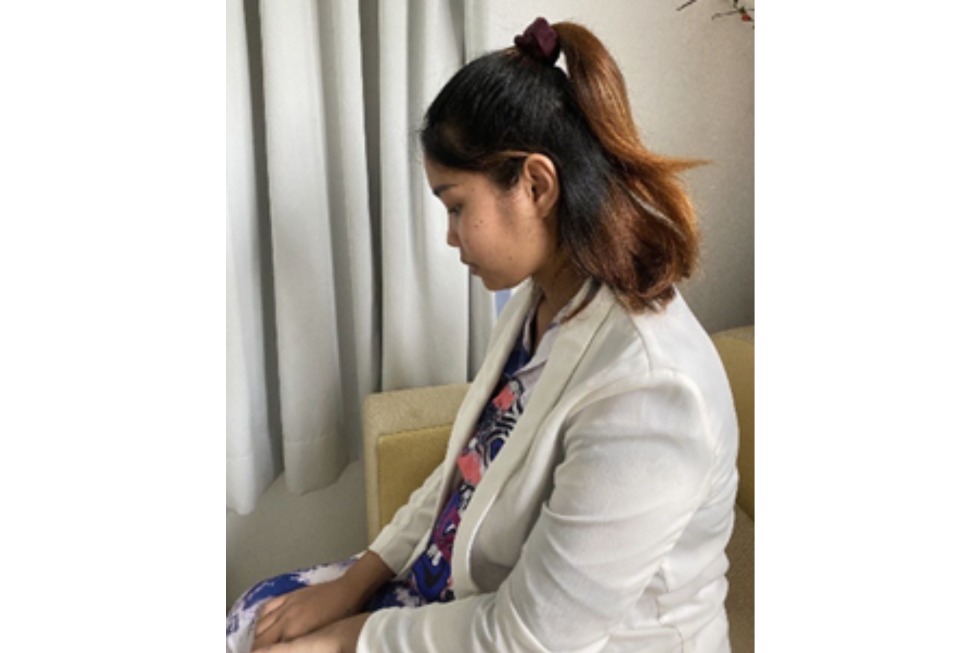 Sopha is from Phnom Penh, Cambodia and the eldest daughter of six children.

When Sopha was 16-years-old, a broker repeatedly persuaded her to go to China to marry a wealthy man, promising her a better life and 1,500-2000 USD upon arrival to send her family. Sopha wanted to help her family buy a house so they could stop renting, so in 2017 she finally agreed.

However, Sopha was trafficked to China through Vietnam as an illegal migrant. The broker sold her to a Chinese man and he and his family enslaved her.

When she first arrived, she was forced into sex and household chores. She was also forced to work in fields without pay. Her new husband physically abused her, slapping and hitting her when he was emotionally unstable.

The family locked her in the house and never allowed her to go out or communicate. They controlled her phone by disallowing all social media and applications in the Khmer language.

Sopha tried to contact her mother from the bathroom, deleting numbers and messages afterwards, because she knew if she got caught she would be in trouble and even killed.

After more than four years Sopha gave birth to a baby boy. Sopha was in a lot of pain and never felt physically or mentally safe, especially because she was not allowed to communicate with her family.

After giving birth, I took care of myself. Sometimes I did not have food to eat. No matter what, food was always scarce. One week after giving birth I had to return to work at home and on the farm. Every time my child cried, he and his family members scolded or abused me. The worst thing was being forced to always have sex with him, even after I had just given birth.

For over four years Sopha lived in constant fear, even though she never dared to do anything wrong. Family members often yelled at her when they were not satisfied with her or when her baby cried. She was terrified and trembled when they looked at her. She had to hurry to do what they wanted her to do, fearing they would harm the baby.

Every time they went out, she had to stay home with her baby. Sopha tried to run away many times but did not succeed.

One day when her baby was around two-years-old, she met a Chinese woman who felt sorry for her and had an opportunity to escape. The woman called and paid for a taxi to take her to the police station. Since she had not received the COVID-19 vaccine, police quarantined her for three weeks, then discovered she was three months pregnant. Police then sent her to a center for the elderly. Sopha stayed there for about five months and was predominantly fed porridge until the Cambodian Embassy intervened and brought her home.

Sopha arrived back in Cambodia on March 10, 2022 and was quarantined for 14 days. She had nothing, was heavily pregnant and so afraid the Cambodian government would send her to another facility until Hagar staff contacted her and told her about their services. Hagar bought her clothes and immediately sent her to a clinic for a health check-up as she felt weak from malnutrition.

I got nothing from the broker and man as promised and I am now more than seven months pregnant. My life is dark and hopeless. I am happy to be back in Cambodia, but always cried in quarantine. Some said I would be sent to another kind of prison after. But I was very happy after being contacted by Hagar who informed me of their services and where to go after quarantine. Hagar brought me food during my stay at the quarantine hotel and even provided counselling. I am so happy to feel the warm care from Hagar staff

Sopha was taken to Hagar’s ‘Home of Love’ where she was blessed by the maternal nature of her foster mother.

I love my foster mother. I felt safe, warm care and love from her. I had good food to eat and was completely free as if staying at home. When I was hungry, my foster mother cooked or went out to buy food for me. I hope my baby is as healthy as I feel now. Thank you Hagar for your support to give me hope and strength to think about my future and that of my children.

Sopha was reintegrated to her family house on April 7 but her family’s living condition had worsened. Her father had been jailed for drug offences and her mother had just given birth to another son.  Her siblings did domestic work to support their living, while her mother sold dry clams along the road.

After reintegration, Hagar continued to provide health care at clinics for childbirth and nutritional assistance to ensure Sopha and her baby stayed healthy and recovered from malnutrition.

Sopha continues to receives support for rent, psychological counselling and case management support. Her plan is to assist her mother to run a small business.

On May 1, Sopha safely delivered a baby girl. Hagar covered the health care costs and supplied baby products. Hagar also helped secure a birth certificate and ID poor card to get support from the government equity fund. Both mother and baby are healthy.

I have no words to describe what I feel for the support Hagar has given me. It goes beyond family care. The Hagar team has always been in touch with me and supported not only me but my family. My mental health has improved and I have gained more self-confidence. I can share my story and problems in detail with the counsellor like never before. The Hagar team has helped me think and plan for my future, my daughter, and family. I don’t want my daughter to end up like me. I want to learn, open a beauty salon and sell perfumes and cosmetics online after giving birth. I will do my best to help my family and make my dream come true.