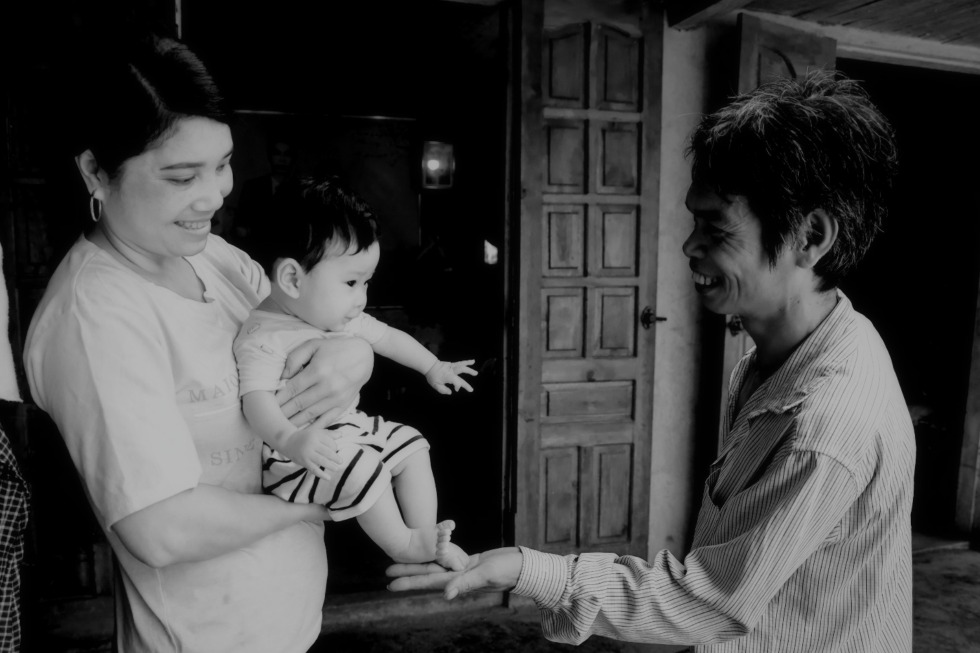 Looking at Lan and husband Dat happily holding their baby, no one would ever guess that violence existed in their house for years.

In the past, the couple’s financial struggles provoked conflicts between them. With a sole income from farming, things were difficult and for almost two-thirds of their 20-year marriage, Lan’s wounds remained unhealed.

Fortunately, the Women’s Union of Yen Bai encouraged Lan and her husband to join the peer group run by Hagar Vietnam. They believed that involvement would help heal their relationship by offering them an opportunity to understand each other better and learn how to live more effectively and sustainably.

The peer group had 25 couples participating, with group counseling sessions held for 2-6 days in separate male and female groups so members felt safe to share their stories and trauma. It also involved monthly activities to provide knowledge on gender equality and the law to raise women’s awareness of their rights, helping them increase their self-esteem and confidence. Sessions were provided to men to help them realise and control drivers of violent acts. The last few monthly meetings were held jointly with men and women to raise awareness among members about the impact of trauma on children and nonviolent communication.

At first, Lan was embarrassed because of the bruises on her face. Meanwhile, her husband Dat was surprised by how many male members were in the group. Through games and storytelling, the members quickly connected with one another and by the second session, people overcame barriers and sought advice.

Lan said that since joining the peer group, her husband completely changed. He loves her and their children more and always helps with the small things.

“Once, when I came home from work, I saw a meal cooked. I thought it was my son but it turned out that I was wrong. There were only my husband and I at home at the time. This was when I realised my husband changed. I was so touched I cried.” Lan said, smiling.

Dat also shared what he gained from the program.

“Now I know that not only is beating considered violence, but swearing and using inappropriate gestures are also violent acts,” he said.

Not only did he change himself, but Dat also boldly shares his story to support and encourage other male members, who have unhealthy ways of expressing themselves, to change their mindset and behaviours. The positive change in Lan’s husband inspired other husbands to become less short-tempered and willing to help their wives with housework.

Conflict was a normal and natural part of their marriage but now, instead of expressing himself aggressively, Dat communicates in considerate and thoughtful ways, thanks to knowledge he learned about conflict resolution from Hagar staff.

Throughout the course of the 3-year project, things changed and witnessing her husband’s transformation, Lan was happy to have a second-child after 10 years.

“3 years ago if you asked me about having another kid I would never have given it a thought. Because of our constant conflict and financial pressure, a second baby would have been hard and I did not want my child have to endure violence like my older kid,” said Lan.

The couple had a baby boy who brought the laughs the family was missing for a very long times.

In addition, to enhance Lan’s economic capacity, Hagar provided her with a pair of cows. Lan’s effort to raise the cows and sustain her family’s finances has paid off. One of the cow’s had a baby and this calf is now an extra addition to the family!